Hello from Dubrovnik, Croatia. As soon as we arrived, I saw a BBC news report about migrants to North Carolina. After dinner, some of our group went down to the beach -- yes, the beach! We are on the Croatian Riviera, after all. Some of us headed to the Old City for a sneak peek.

Today was another busy day as we left Sarajevo and traveled to Mostar for a meeting with OSCE officials and then to the United World College. From there, we went on a walking tour of Mostar. When that was done, we headed through border crossings into Croatia, then into Bosnia, then back into Croatia to stay.

Here are some photos from today. The first two are from the walking tour, showing the Roman baths and a bullet-ridden shell of a building on Mostar's main thoroughfare. 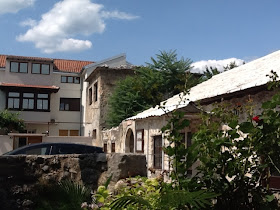 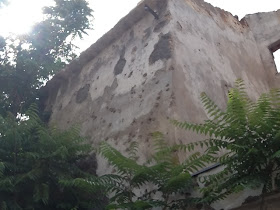 The next photo is for the foodies. It is my lunch of japrak, grape leaves stuffed with meat and rice. 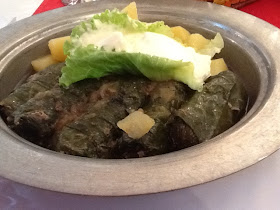 I have had a fantastic time and have so many possible connections for the college, and I am so excited about visiting the University of Dubrovnik tomorrow. Until then, good night!